Cars and other 1:1 Scale Vehicles Print

hobbyDB has Types for Cars, Buses, Trucks, Motorcycles, Ships and Planes. For these, we have some different Best Practices. While for Model Cars we would have a white, green and red variant of a Matchbox Porsche 944, we don’t do that for 1:1 Vehicles.

This is because while the Matchbox Porsche 944 would have three variants, by the time you worked out all the differences real Porsche 944s could have — different engine options, paint colors, interior colors, stereo, etc. — and the number of different combinations of these, there would be thousands of variants and that would create an overwhelming number of catalog entries that wouldn’t be very useful.

Instead, we create entries based on major visual differences. So, for example, if you were to take the Mk1 VW Golf family, you’d see it includes:

Sometimes there might be exceptions. For example, the 1969 Mustang Mach 1 fastback usually has a hood scoop and spoiler while the base model fastback has neither. You might consider that to be a major visual difference since it’s visible at a glance. In that case, it’s up to you as an expert and the rest of the community to decide if the differences are big enough to warrant two entries.

When relating catalog items, this would mean that we relate this Maisto model of a 1965 Corvette Police Car to the 1965 Corvette Coupe. 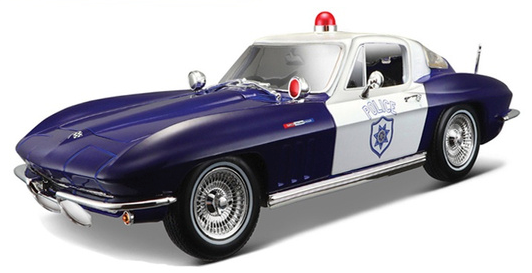 The same principle applies to other 1:1 Scale Vehicles.  For example only one entry for the Supermarine Spitfire versus having one entry for its different liveries: